home Go back to home

menu Menu
Opportunity in the Crisis of Democracy
By Jean-Paul Gagnon Posted in Academic Journal Article on May 11, 2021 0 Comments 9 min read
Previous Next

Opportunity in the Crisis of Democracy

[This editorial, first published by Democratic Theory, is co-authored with George Vasilev.] 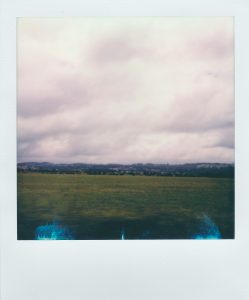 To say, then, that the crisis of democracy is a mainstream concern for democratic theory in the contemporary period is no overstatement.

Featured in this body of literature are a number of landmark books and journal articles which assert that democracies are currently facing difficult times (e.g., Della Porta 2014; Diamond 2015; Streeck 2014; Urbinati 2014). Such work might seem alarmist given its choice of terminology. However, descriptions of a crisis should not lead to despondency or panic among supporters of democracy. Rather, to echo Leonardo Morlino (2008), the crisis of democracy can be filled with progressive potential. We share Morlino’s conviction and highlight below what such progressiveness might look like (for more on the progressive potential of crisis, see Chou 2015). 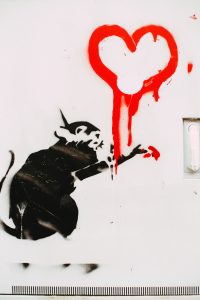 The Transformative Potential in the Crisis of Democracy

A number of scholars writing on the theme have emphasized that a crisis of democracy is not a fatal condition, only a state of affairs that points to the challenges democracies face (Schmitter 2015). Fascism is not popular, totalitarian communism remains an artifact of the twentieth century (save for derided North Korea), and China’s or Singapore’s efficiency in governance has not displaced democracy—despite its tendency to policy stagnation—in the hearts of today’s youth.

Indeed, it is a misplaced belief that democracy is at risk of being overshadowed by a competing form of government. This belief has been kept alive by decades of sensationalist media blitzes and panic-stricken scholarship influenced by the widely publicized Trilateral Commission Report compiled by Crozier, Huntington, and Watanuki (1975). However, the circumspect analyst would recognize that “crisis” and “democracy” are loaded and ambiguous terms. Contextual awareness reveals that when the media or scholars proclaim “a democracy to be in crisis,” they are actually saying that “a type of democracy is experiencing a specific problem caused by an identifiable stressor” without necessarily implying a terminal prognosis. As Wolfgang Merkel (this issue) puts it, bearing crises is simply what democracies do—it is a normal condition that creates rupture, renewal, progress.

Understood in this way, a crisis of democracy, and its accompanying rhetoric, can be seen as a call for action to address the very deficiencies crippling existing democratic practice. In today’s world, such deficiencies include citizen disengagement, de-democratization and regression toward authoritarianism, far right populism, accountability deficits among elected representatives, the capture of policy-making processes by powerful interests and lobbyists, the continued disenfranchisement of racial and ethnic minorities, and the inability of people to influence decisions made outside their nation-states that have negative consequences on their lives. Crisis talk draws attention to these anti-democratic developments and creates urgency for change that can be progressive. To apply Daniel Bray’s (2011: 158–161) pragmatist insights, the framing of the current state of affairs as a crisis of democracy is a public process of creating a shared consciousness around an emerging social problem and, by extension, a shared consciousness around an accompanying set of prescriptions for its resolution. Such problem-solving publicly specifies which type of democracy is in crisis (Urbinati, this issue), which area in that democracy is encountering crisis, what is the nature of the crisis being experienced (Merkel 2014 and this issue), who or what is causing the crisis, and how the crisis might be handled.

To define a problem as a crisis of democracy is not to imply a single solution. In fact, there are good reasons why progressive transformation and democratic renewal should be treated as a plural. At the level of the union-state (Fukuyama and Gagnon 2014: 52–53; Gagnon 2011), any democratic regime is actually a blend of different types of governing systems and ideals, and not a product of one uniform template that is copied universally. It is the blend of democracies, including competing understandings of representational and electoral practices, which gives a regime its democratic mantle.

It is commonplace to think of a democratic regime as practicing only one type of democracy—that being representative democracy in the majority of instances. However, a more accurate reflection of reality is that democratic regimes encompass a spectrum of representative, electoral, participatory, deliberative, monitory, direct, and electronic (among other) types of democracy practiced in a variety of configurations. Democratic regimes like the United States, Canada, Germany, Norway, Switzerland, and Australia are blended systems of this sort.

The implication of this insight is that different democracies can be affected by the same crisis, but will require a different resolution tailored to meet the normative imperatives of the unique governing system that has been historically favored. Figure 1 provides three examples of crises: terrorism, inequality, and participation deficits. These crises can arise in five examples of democracy: representative, deliberative, direct, electronic, and monitory. The way that these five democracies are affected by, and should respond to, each crisis is contingent on their unique democratic character and cannot be determined independently of empirical particulars.

Figure 1 – Crises and their interactions with democracies inside a regime 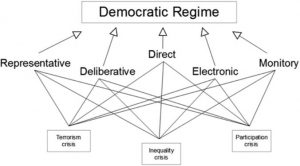 This understanding of crisis problem solving—as complex, pluralistic, and empirically rooted—is a gain for democracy. It does not imply the adoption of a single governing system blind to local preferences. Rather, it implies citizens can decide for themselves what their governing systems should look like at different locations and periods, a core requirement of being treated as free and equal (Tully 2002). 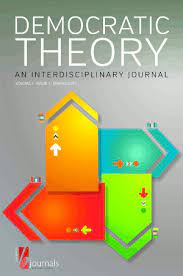 We opened this editorial with our own take on the opportunities that lie in the crisis of democracy because the articles and interview in this issue trade in the topic.

Barbora Capinska’s article follows. She argues the claim to nonviolence that democratic peace theory makes does not translate into the domestic context. At home, democratic regimes are inherently coercive and repressive to the peoples they govern. Capinska proposes a number of solutions to this problem including that democratic regimes could become less coercive and repressive by co-designing and co-administering public policy with citizens.

Next, Sara Raimondi argues in her article that liberal representative democracies govern through states of emergency. From Benjamin, to Agamben, Schmitt, Foucault, and Scarry, Raimondi takes us through the paces to show that we can create the means to respond to this perennial crisis only by actively resisting states of exception.

The last article in this issue is by Matthew Howard who argues that Australia’s democracy, and by extension other democracies, are problematically undemocratic when it comes to public, collective, memory. Successive governments in Australia have, for example, reaffirmed the importance of the World War I battle of Gallipoli (starting 1915) as a tragedy that gave birth to the Australian nation. This is despite the fact that Australia had, according to Clare Wright (2014), already gained its international reputation as a nation in 1902 for its global leadership on women’s suffrage (Australia being the first country to award women the vote and the right to hold parliamentary office).

Fukuyama, Francis, and Jean-Paul Gagnon. 2014. “Democracy Before and After the State.” Pp. 42–55 in Jean-Paul Gagnon, Democratic Theorists in Conversation: Turns in Contemporary Thought. London: Palgrave Macmillan.

Gagnon, Jean-Paul. 2011. “Nation-State or Country-State? How Do We Discuss Belonging in an Age of Fluidity?” openDemocracyUK, 12 April. https://www.opendemocracy.net/ourkingdom/jean-paul-gagnon/nation-state-or-country-state-how-do-we-discuss-belonging-in-age-of-flui.

Further reading: Democracies in their crises are reconsidered here.